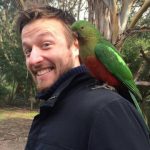 Michael’s pen has done a fairly decent job of making its way around the world up until now. Born and raised in an old fishing village called Leigh-on-Sea, resting along the Thames estuary, Michael never once caught a fish, so decided to leave for University in the Big Smoke.

A BA and MA in Creative Writing and a book later, he went backpacking around South East Asia with his partner. It was on his travels looking at temples and running from monkeys that he finished his second novel.

He settled in Melbourne for two years where he freelanced as a copywriter, before he and his partner moved to Singapore. And that’s where book number three was birthed. He’s been in Singapore for three years and looks like he’s gonna be sticking around for a while.

There are no users currently online
Group Member
Subscribe for updates
Complete this form to receive a weekly e-mail with links to new blog posts at Pens Around the World. Complete your subscription by clicking on the subscribe link we sent to the e-mail address you gave us.
Recently Active Members