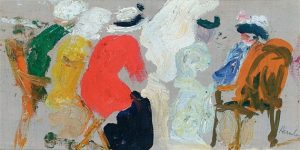 Once upon a time I worked as a teacher of conversational English to adults. Getting my students to talk was the core of the job. Conversational prompts in the textbooks we had were usually dire, so I looked for other ideas. One that worked more often than not was The Memory Game.

Setting up the game, I asked the class to think of a few dates significant to them personally. Dates of personal memories. For example, I often suggested their very first memory, their first day at school, the day they moved into their own home for the first time, the day of their first date. (I tried to identify more upbeat memories, but the date of a divorce settlement, an illness, or a significant death sometimes crept into people’s minds.) I asked them to pick a few of these memories that they would be prepared to talk about to the rest of the group.

Then I gave each of them a few sticky labels where they could write down the dates of their significant memories, one date on each label. Once they’d done that, we stuck the labels onto a timeline in roughly chronological order, in a wide circle with one label marked Start, as in the picture. Everyone chose a playing piece (a button, a coin, a paper-clip, a twisted scrap of paper) and assembled them on Start. Then we threw dice to move our pieces.

The person landing on a date, then asked the person whose date it was questions to get the story of the memory. If they landed on their own date, then everyone else got to ask the questions.

Once a date had been “played”, we crossed over it and didn’t land on it again.

It’s a good game because, as a teacher, you can vary it depending on the numbers and ability levels of the class, and it needs very little preparation, just the sticky labels, paper, a dice. I played it with classes of all ages from upper teens to pensioners and most classes enjoyed it. I even got the occasional “Can we play it again, please.”

What this taught me was that everyone, without exception, has at least a small library of significant personal dates, and that all the dates come with stories attached. This is obviously relevant to writers of biography, memoir and the personal poem, but also to writers of fiction. Every rounded fictional character, whether protagonist, antagonist, supporting cast or spear-carrier, will also have a small library of significant personal dates. Finding those dates out, telling those stories — if only to yourself as an author — helps you build your characters into three-dimensional figures that stand out off the page.

After that preamble I hope I’ve sold the idea of significant dates and stories. Here follow the writing prompts. As so often with my Pensives, there are six. My apologies to those of you who prefer just one! But remember, if one doesn’t jump out at you demanding to be written, role a dice and see what chance gives you to work with.

1 Memoir/Poem. Pick a significant date in your own experience and tell the story of it in 500 words or less. Or write a poem about that date/event in no more than 14 lines. (You can make it a sonnet if you like.)

2 Flash fiction/Poem. Think of one of your memorable experiences. Identify an object, an emotion, a scent, a colour or a taste you associate with that memory. Write a flash fiction story (or a short poem) based on the object/emotion/scent/colour/taste.

3 Short Story/Flash fiction. Choose three events tied to three dates (which may be drawn from your memory or may be invented). Write a brief story or story outline in three paragraphs linking the three dates.

4 Novel – character development. Identify one, two or three significant dates in your character’s early life. How do they impact on the their character or behaviour? Write a scene in which the impact of this event/these events is made concrete in something your character does or says in the context of the novel you are writing. (You could make this a dialogue if you like.)

5 Travel writing/Novel development. Identify a place in a city, a building perhaps, or a boulevard, a park, a monument, a market. If you want, fictionalise this. Write about one, two or three significant events in the life/history of the city that are associated with the place you’ve identified. If more than one, do they have a bearing on one another? What does it/do they say about the city, which could be the setting for your novel/short story/epic poem/biography?

6 Meta. Write the outline of a short story (or write a flash fiction or a poem) about an English lesson using The Memory Game that goes dramatically or comically wrong. (Reader, it has happened!)

And if you want to read more about memory and writing – why not read Kimberly’s Bi-Weekly Wisdom from last August, What Is It With Humans and Story?

John Nixon
John Nixon was born and brought up in England, but has lived more than half his life elsewhere in various places, but mostly in Sweden. He calls Gothenburg on the Swedish west coast his adopted home town. He used to teach English and history to high school students and various sorts of English for specific purposes to adult students. Nowadays he lives by writing and translating technical and educational texts and websites. In his spare time he blogs at TheSupercargo, and writes poetry, flash fiction, longer stories, pieces of novels and podcast scripts. Website: https://thesupercargo.com
View All Posts

Greetings from Pens from Around the World

No comments yet. Why don’t you start the discussion?

Group Member
Subscribe for updates
Complete this form to receive a weekly e-mail with links to new blog posts at Pens Around the World. Complete your subscription by clicking on the subscribe link we sent to the e-mail address you gave us.
Recently Active Members