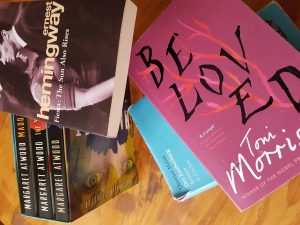 A good deal of contemporary culture is characterized by our preoccupation with the stars and starlets who drive the social media, film, and music worlds. Whether we want to or not, we run into them on television, online, or in film. Some are really movers and shakers; others seem to be famous for no plausible reason other than that they are famous. Or so it seems if you are not in the loop.

As a writer, I’m inclined to follow the stars, contemporary or historic, who populate the writing firmament. I follow them because these individuals catch my imagination and I want to know more about them personally as well as what formed and influenced their writing. I read reviews of their writing by credible critics or other renowned authors. Is it in the hope that some of their starshine will rub off on me, or perhaps that I will pick up some ideas for stories or writing techniques? Without a doubt. I spend a lot of time (maybe too much) reading about Mann, Hemingway, Fitzgerald, Atwood, Morrison, and others of their ilk in search of their magic. My quest is driven by countless internet sites about them and their craft. I subscribe to several sites that send me too many emails luring me to read more. They are only “too many” because I succumb to following their links and wind up disappearing down rabbit holes into the lives and crafts of my favorites.

One of the very best sources for these articles is a giant in the world of literature and literary criticism: The New Yorker. Founded in 1925 by Harold Ross, it has become the crème de la crème in the English language writing sphere. A subscription has enabled me to access their archives. They email me links to short stories by Hemingway et al that were published back then, as well as contemporary criticism of those stories. They provide us insight into how the work was received in the context of that time.

Of course, other sites (written by mere mortals) abound, offering short fiction, and inspiration, and tips on writing craft. Most writers (and readers) will already have go-to sites, many authored by a variety of writing magazines.

Here, a short list of some very useful and enjoyable ones that I have happened upon:

Open Culture: http://www.openculture.com: strictly speaking, this is not just about writing but about every creative endeavor humankind pursues.

A film we watch, a book we read, an art exhibition we visit, a conversation with a friend – or an enemy – everything we read and experience feeds our brains and enriches our writing. There’s no telling where the next spark for a story might originate.

Do you have a story to share about the inspiration that led you to write a piece of fiction or non-fiction?

Debbie Hubbard
Debbie Hubbard, aka DC Hubbard, is an American ex-pat who has spent most of her adult life in Germany, or elsewhere in Europe. She went to Germany as a graduate student long, long ago in a universe far, far away, never to return to the US. Now she lives in an idyllic village with one English husband, one goldie, and two sassy cats. Her three wonderful adult children and their entourages live close by. She hedges only one regret: That she started writing so late. In 2012 she published her novel "The Peace Bridge". Since then, she has had around a dozen German-language short stories published in anthologies. Her love of European history is the driving force behind many of them. However, in the past four years, aberrations in US politics have redirected her thoughts from a historical focus to current political events. In the end, what she enjoys most is playing with language(s) to tell good stories, preferably ones that offer insight into the human condition.
View All Posts

Can you Survive the Haunted Horror of the Witches’ Vampire House?

Group Member
Subscribe for updates
Complete this form to receive a weekly e-mail with links to new blog posts at Pens Around the World. Complete your subscription by clicking on the subscribe link we sent to the e-mail address you gave us.
Recently Active Members