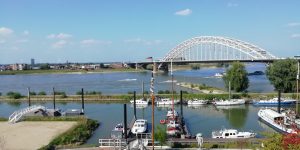 It’s my new home town but asides from that there is much to discover about this city which overlooks the River Waal on the Dutch/German border.

I would love to hear more about your hometown, or village!

Angela Williams
Angela writes using pseudonym, Susan Carey. Since 1986 she has lived in the Netherlands where she writes stories in between the less demanding jobs of house-sitting, dog-walking and dreaming of worldwide renown. She has had short stories and flash fiction published and performed by amongst others; Mslexia, Liars? League, Writers Abroad, Reflex Fiction, Flash Flood Journal, The Fabulist and Casket of Fictional Delights. In 2020 she published her story collection, Healer. Available on Amazon. Blog: https://amsterdamoriole.com/writing/ Twitter: @su_carey
View All Posts

A Pensive on Writing Place

Group Member
Subscribe for updates
Complete this form to receive an e-mail when we post a new Monday Muse or Bi-weekly Wisdom. Complete your subscription by clicking on the subscribe link we sent to the e-mail address you gave us.
Recently Active Members